The oldest and best wine region in South Africa is around Stellenbosch, a short drive from Cape Town on the country's southern coast. Vines have been grown there since the late 17th century.

High mountains produce a micro-climate that is three to four degrees warmer in summer and a similar number of degrees cooler in winter. This produces a longer ripening period. The best way to visit the vineyards is to take the famous wine routes, established in 1971. The five current routes take you past 148 vineyards. The high number of vineyards also means that prices are competitive. A good time to visit, if you like crowds, is to attend the Stellenbosch Wine Festival, usually held in June each year.

I visited Warwick Estate in early July, just after the festival. The estate started in 1770 as a fruit farm. The Ratcliffe family planted vines in 1964 and winemaking started two decades later. Norma Ratcliffe became one of South Africa's first female winemakers. 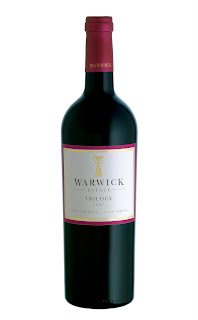 Warwick's flagship red, the Trilogy (a traditional Bordeaux blend of cabernet sauvignon, cabernet franc and merlot), was selected in Wine Spectator's top 100 wines around the world for a second time in 2009. I tasted the 2007 Trilogy and, though still young, it had a distinct cigar box aroma and tasted of dark chocolate. The wine receives 24 months in French oak (40 percent new), so it exhibits a dusty tannic structure. This means Trilogy should be cellared for at least eight years after vintage. At about $34 (about 230 yuan) a bottle from the vineyard, it is a bargain.

Another standout wine was the Old Bush Vines pinotage 2008, another bargain at about $13. Pinotage is a grape variety conceived at the University of Stellenbosch, a hybrid made from pinot noir and shiraz. Pinot noir struggles in the South African climate but the hybrid flourishes because of the influence of the more rugged shiraz. Another excellent Warwick wine is the Three Cape Ladies, a blend of pinotage, cabernet sauvignon and shiraz. It sells for $15. It also receives solid oak treatment, this time 23 months in French oak (40 percent new). And it should be cellared for up to a decade before being consumed.

Stephen Quinn traveled to Cape Town courtesy of the South African Tourist Board.