The 13th Annual London SA Wine Auction, in aid of Jan Kriel School took place on Thursday, 19 May at the Plaisterer’s Hall, London. More than £35,000 (Thirty Five Thousand Pounds) was raised for the learners of Jan Kriel School; a school for children with learning disabilities.

The Jan Kriel London Wine Auction was established in 1998 as a brainchild of Dave Hughes to create not only awareness of the top South African Wines, but also to raise much needed funds for Jan Kriel School. Throughout the years the auction grew and the name was changed.

The 2011 London SA Wine Auction included accommodation packages on wine estates, internationally award winning wines and rare collectors’ items. More than 40 wine estates were represented at this gala charity dinner and auction. Mike Ratcliffe (Warwick Wine and Vilafonte) acted as auctioneer and the presence of Johann Krige (Kanonkop), Duncan Spence (Rickety Bridge) and Chris Edge (Cape Legends), to mention but a few, contributed to the success of the event. The Warwick and Vilafonte lots raised the highest bids of around which make it impossible for them to attend mainstream schools. This year 550 learners enrolled and the Head Boy, Mathew Hardie and Head Girl, Lize Loubser represented their school in London, at the event.

The 14th Annual London SA Wine Auction will coincide with Jan Kriel School’s 75th Birthday celebration in 2012. The auction will take place on Thursday, 24 May 2012.

Posted by Unknown at 1:30 PM No comments:

Marquee setup by Downings Supplies
Posted by Unknown at 1:48 AM

Mike posing in our newest vineyard at Warwick 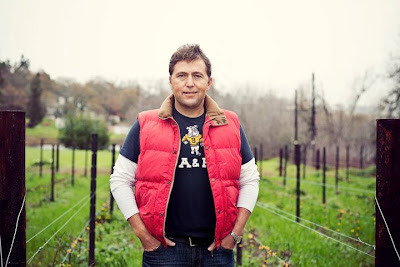 Posted by Unknown at 3:17 AM No comments:

Book your seats now for Warwick Christmas in July! 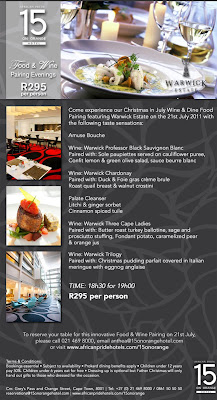 For bookings and inquiries: anthea@15onorangehotel.com
Posted by Unknown at 3:23 AM No comments: