to the Test in a Star Studded Line Up in London in March 2009. 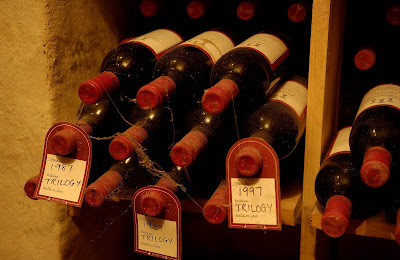 Handford Wines based in South Kensington, London, and who have historically stocked one of the best ranges of South African wine in the UK, recently hosted a block buster blind tasting line up of South African Flagship red Bordeaux blends from the illustrious 2004 vintage. The blind tasting, jam packed with icons and award winning reds, was presented by two Masters of Wine, including one of South Africa’s very own, and only the countries 4th to achieve this prestigious qualification, Greg Sherwood MW. The tasting line up featured:

Presented in four flights to a panel of expert fine wine consumers, tasters were required to rank their first, second and third best wines, rating their first choice 3 points, their second choice 2 points and their 3 choice 1 point. Scores for the twelve wines were tallied at the end of the tasting and then wines were revealed.

Other than the Constantia pair that opened the proceedings, the evening in reality doubled up as a battle of the blue blooded Simonsberg / Stellenbosch “grand cru classe” blends from South Africa’s prime viticultural region. In assessing the results, Master of Wine Greg Sherwood said “it was always felt that it was going to be a close run affair. With such a high level of quality across the line up, the wines did South Africa proud. There can be no doubt that SA produces some of the best examples of a Bordeaux blend in the world.”

Based on the blind consumer scoring system, the results were as follows:

Greg Sherwood MW continued “the congestion of scores around 9 points was pretty much what we expected might happen with so little separating the quality of this batch of prestige red wines. James Handford MW added “I had rather expected a few more stand out block busters in the line up, but overall, the quality was consistently very high. If you consider the price of these wines in relation to the best from Bordeaux, France or Napa Valley, they represent exceptional value for money and importantly, wines that are definitely ageworthy – something important for fine wine collectors globally.”

Greg Sherwood concluded “the is no question that along with Syrah, Syrah blends and a perhaps a handful of top Cape blends, the Bordeaux red blend is certainly one of the strongest cards in the South African wine industries hand. No doubt about the whole being greater than the sum of its parts in this case!”

Tasting hosted by Handford Wines on the 25th March 2009.