Ferran Adria, the gastronomic giant of the gourmet world descended on Cape Town last week to participate as a 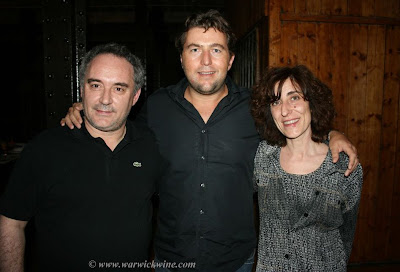 headline guest in South Africa’s very own Design Indaba. There can be very few industries in the world where one person can so single-handedly dominate and command respect from almost every quarter. Like Tiger Woods dominates the world of golf, über-Chef Ferran Adria reigns supreme in the more diverse, subjective and opinionated world of cooking - a world renowned for its egos, tempers and back stabbing antics. The tiny El Bulli restaurant owned and run by Ferran Adria has been called "the most imaginative generator of haute cuisine on the planet" and named best restaurant in the world a record 4 times by Restaurant magazine in 2002, 2006, 2007 & 2008.

And so it was that we gathered in an old warehouse on Commercial Road in Cape Town in anticipation of welcoming this giant into our midst. At the risk of suggesting any insinuation of disappointment, his arrival was underwhelming to say the least. The maestro arrived almost under the radar and slotted into the bar without a hint of pomposity or ritual. In fact he was quietly tucking into a cold beer and smoking a Marlboro on the patio before many of the assembled guests had even acknowledged his arrival. Accompanied by his charming and bubbly wife Isabella, she also acting as translator from their native Catalan, they wowed and charmed the collected admiring throng – never once declining to accept one of endless admiring compliments, give out an autograph, engage in a friendly translated chat or even pose for a photograph. Given the global standing of this man, his impeccable stage presence and ability to appear interested at all times were beyond reproach – such is the burden of celebrity and such is the expectation of global recognition and awe.

We were, in fact, at this beautiful surprising venue for dinner and what a feast we were served. The brief for the evening (apparently) was to translate the term ‘local’ for Ferran Adria – define an answer to what it is that makes cooking in South Africa unique? And local we sure got! A snapshot of a few items on the menu included some imaginative combinations:

To create this veritable ‘who’s who’ of South African staple food, Chef Richard Carstens of Nova in Cape Town teamed up with Topsi Venter, often described as "the doyenne of Cape chefs". Richard Carsten is certainly one of the hottest talents to emerge from South Africa and has appropriately developed a reputation for some ‘experimental and adventurous’ cooking that is not for the faint-hearted. While not for everyone, the radical and inspired menu threw up a lot of ‘culinary curveballs’ that were alternately dodged or devoured by the enthused gallery. Despite my best efforts, it was difficult to attack the Zebra with much gusto and the Springbok tongue felt perfectly inappropriate, irrespective of who it was being served up to. Despite my personal lack of enthusiasm for a few of the over-eager entrees, it did all somehow come together and sitting opposite Senor Adria, I noticed that he finishing everything that was served up to him – to his credit. The evening was perfectly managed by Richard Walsh, co-owner of Nova and one of Cape Town’s most seasoned ‘front of house’ directors in the business.

It should be mentioned that this extravagant evening was made possible by the generous sponsorship of Dick Enthoven & Robbie Brozin, MD of Nandos. Great credit should also be paid to Ravi Naidoo, the inspirational owner of Interactive Africa, the company that runs Design Indaba.

The evening was an excellent opportunity for his-foodiness, Mr Ferran Adria to experience some exotic and imaginative experimental African cuisine; but who better to judge than the man himself? Perhaps Ostrich foam or Zebra ice-cream will be the next big thing in the little town of Roses on the Costa Brava, home to El Bulli? Hold your breath if you must.