So, the holidays are done and dusted, and it’s back to reality. Hopefully I can cheer you up a bit by bringing you the good news that all you need to relax is a bottle of wine and some friends. And what better estates to do that than Warwick and Lievland!! I was there on Thursday to taste some wines and to get a feeling of how they do it.

For those of you who do not know anything about Lievland, it is a very small estate out on the R44 on your way to Paarl from Stellenbosch. When I say small, I mean really small. There are cows and sheep grazing not too far from the tasting area, and a few ducks splash around in the pond nearby. This makes for a very relaxing time indeed. The tasting itself is also very informal, with the assistant giving you the bottles and you helping yourself. All this almost made up for the fact that she didn’t really know anything about wine…

Sauvignon Blanc 2011: The Sauvignon Blanc was not amazing. It had hints of tropical fruit, and a bit of Golden Delicious apple on the palate, but at the end of the day there was no depth or follow through on either the nose or the palate. It isn’t a horrible wine at all, but for R50 there are a number of other Sauvignon Blancs that I would rather buy. It gets 2.5. 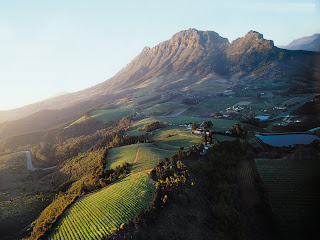 Lievlander 2008: The Lievlander is a delightful blend of Cabernet Sauvignon, Merlot, Petit Verdot, and Shiraz. There are loads of ripe berries on the nose, complimented by hints of cherries and some nice peppery spices. On the palate you find more of the same, with the Shiraz coming through a bit more to give a nice peppery, savoury, aftertaste. The price makes it taste even better! At R50 a bottle this wine can do no wrong. It gets a solid 3.

Shiraz 2005: The Shiraz was the pick of the wines at Lievland. There are quite a bit of spice on the nose and the palate, with the soft cherry flavours just to even out the spices slightly. There is still a little bit of tannins, but most of them have softened by now. It costs R100 per bottle, which is not bad for a flagship wine, but I do not think it is twice as good as the Lievlander. After tasting the Lievlander I was expecting a great booming Shiraz to end off on a good note, but it was a bit of an anticlimax. I rate it at 3.5.

The second stop was Warwick (http://www.warwickwine.com/). I have always been a big fan of their wines, and in the last year and a half, they have really put in an effort to renovate the whole tasting area. The outcome is that there is now a small deli to go with the beautifully rebuilt tasting room. For those of you who do know the estate, do not worry, the great deck is still outside overlooking the pond. In addition to this you can now order gourmet picnics to enjoy as well. I have to say, the service was a bit slow at times. I know that it is the peak of the season for the wine estates, but if you know this is the case, rather have too many people on staff than to have a few running around the whole time. Having said this, they are very friendly, know their wines, and luckily I was not in any rush. So I had a great time - it has to be said!

Professor Black Sauvignon Blanc 2011: It is a great summer wine. It’s a full wine with tropical flavours, green apples, and gooseberries on the nose. This follows through on the palate. It has really good acidity, which I always enjoy. At R95 per bottle it is not cheap by any means, but it is a quality wine! I’ll give it 3.5.

Chardonnay 2010: The Chardonnay is oaked for 10 months in French oak barrels, and the oak is very prominent on the nose and the palate, but thankfully it is not overpowering. You’ll find some peaches complimented by the vanilla and almond flavours given by the oak. This is a big wine, and I would say one to pair with food. It costs R135 per bottle, and gets a rating of 3.5.

The First Lady Cabernet Sauvignon 2010: The First Lady is made in honour of Norma Radcliff, the owner and first wine maker of the estate. She was also the first female wine maker in South Africa. This is another one of my favourites. When you don’t know what to buy, this never disappoints! There are a lot of currants and oak on the nose. The currants continue in abundance on the palate, and the tannins are very present. At R60 per bottle, I believe that it is really good value for money, and you still get a well rounded, full bodied wine. 3.

‘Old Bush Vine’ Pinotage 2010: If you do not know this by now, I am a big fan of Pinotage. Thus I am always hoping to find a good one to enjoy, or just look at… The ‘Old Bush Vine’ did not disappoint. It has a variety of flavours on the nose ranging from berries to some dark chocolate, and just a hint of vanilla. The vanilla comes through a bit better on the palate, and these flavours are joined by a lot of tannins. The wine is still very young, so you expect that to be the case. It is a very good wine, but I also believe that it will develop even more over the next few years, getting better and better. R95 is not a bad price for what you get, and it deserves (at this point) a rating of 3.5.

Three Cape Ladies 2009: The Three Cape Ladies is a Cape Blend with almost a third of the blend made up of Pinotage. Currants and berries are pleasing on the nose, with mulberries popping up on the palate. The wine has a very good oak structure which combines well with the fruit to ensure that it will age beautifully. R115 per bottle is once again a fair price in my opinion, especially if you plan on aging it for a while. If you are going to let it mature for a couple of years, you will not be disappointed! It gets 3.5.

Trilogy 2008: The Trilogy is the flagship of the estate, and sells for R240 per bottle. I know that it is a lot of money for a bottle of wine, but oh my goodness it is a great wine!! It is a Bordeaux Blend of Cabernet Sauvignon, Merlot, and Cabernet Franc, and it is a classic. The Cabernet Sauvignon provides an abundance of currants, softer berries are brought to the table by the Merlot, and the Cabernet Franc adds some greener flavours to ensure that this wine is as full bodied as it can possibly be! The Trilogy is not some pop singer whose voice disappears into the masses; no, it has volume, body, and a lot of soul!! It is the Tom Jones of wines. By far the best wine that I’ve tasted between the two estates and it gets a rating of 4.5.

That’s it for this addition. If you have any suggestions or requests for which estates to visit, please leave a comment. I will try to post another entry this week, but until then, follow the action on Twitter: @Pounding_Grape. I am following some interesting people and wine estates as well, so go and check it out!

Till next time, enjoy pounding grape!!!
Posted by Unknown at 11:31 PM