Lordy lord, I’ve been sick! I hate, hate, hate losing my tastebuds – if you work in the wine industry, it’s actually one of the scariest of things (what if they don’t come back?) so I will be highly delighted when cheese tastes like cheese, broccoli tastes like broccoli and wine tastes like wine once more.
I fell sick almost immediately after going to Warwick last week – and I refuse to believe the two are related. In fact, I am almost sure that the delicious food I ate and the fantastic wine I drank probably warded off a much worse bout of flu than I have actually ended up with. There was no real occasion for the lunch – just a general get-together for some media and trade and a chance to serve a few small sheeps’ legs to us all. 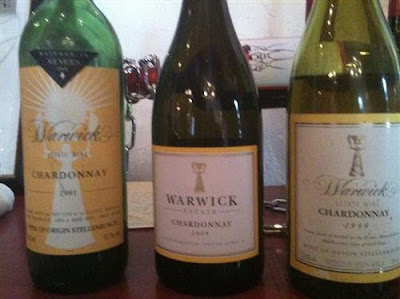 We started off with a round-up of wines which Mike Ratcliffe, MD of Warwick, says he doesn’t generally put into tastings. Following on from our Twitter fest just a few days before, I was hoping for more Cab Franc as it was so yum, but instead, we started with Sauvignon and Chardonnay, moved on to Pinotage and finished up with the new releases of Three Cape Ladies and Trilogy.
I must say, I find Warwick’s wines to be almost universally satisfying. The Chardonnay is beautifully balanced – plenty of wood to be sure, but lots of fruit, good acidity and all very seamlessly integrated. I found it a tad bizarre that the Chardonnay was in a cork closure whilst the Pinotage was in screwcap but Mike didn’t really have any good reason why – it’s just what they thought they could sell and he was happy to follow the market. 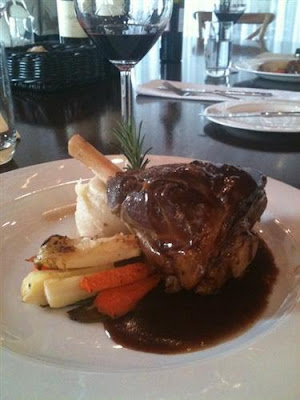 In fact, if anything was strangely incongruous about the day, it was how much Mike kept coming back to the idea of being a follower rather than a leader. For a start, I’m not sure how much I believe him, but secondly, I think he is seriously depriving the wine industry of a figure of intelligence, forethought and stature by taking such a back seat. As the lunch wore on and Mike spoke of his foray into the world of the Cape Blend, of his decision to keep labelling the Pinotage as Old Bush Vines despite the fact that much of it isn’t, the whole screwcap thing – all rather strange and a tad disingenuous from someone who probably owns the pulse, let alone merely has his finger on it.

But enough modesty – Mike’s wines can speak for themselves whatever the circumstances – and when he started digging around in the wine library with a rabidly thirsty Christian Eedes (www.whatidranklastnight.co.za) and Roland Peens (www.winecellar.co.za), it was clear that I should have booked a taxi or used Goodfellas (www.gfellas.com) instead of spitting and driving as usual. Perhaps if I had done, I might have fought off infection for another day. Suffice it to say that the 1999 Chardonnay was awesome, but not quite as good as the older Trilogys or Pinotages with the lamb shank. Who cares if the sheep have to hop? Not me.
It was a lovely day at Warwick. Whether he’s being modest or not, Mike is a generous and warm host with plenty to show off on the farm and plenty to be proud of in all he and his family have achieved. The business is booming – all in all, Mike attributes an additional R2.5 million turnover to the World Cup and expects to build on that this coming summer - especially in the restaurant with their gourmet picnics and family-friendly attitude. If you haven’t been to the farm for a while, go and take a look. Whether they’re following fashion or setting it, there’s plenty to see, drink and do with the Ratcliffe family this year.
Drunk, Cathy Marston
Posted by Colleen Norkie at 2:06 AM