To Russia with Love

Mike Ratcliffe visited Russia on a wine marketing trip recently. Here he blogs irreverently about the experience.Entering the Russian wine market is not for the fainthearted. The beaurocratic mess that is the Russian import regime makes South Africa's wine regulatory red-tape feel like a walk in the park. Add to that the shambolic politically motivated import restrictions and the punitive (and irrationally inflexible) customs duties and taxes and you have already accumulated a number of reasons to avoid the Russian federation all together.And so it was that I found myself facing a barrage of questions from a local customs official after disembarking at Moscow's Demondenova airport. To put it into perspective, the landing card containing numerous illogical questions (like university qualification, interests and hobbies etc) and needs to be filled out in triplicate. Despite a wealth of travel experience, I made the mistake of filling out the wrong form (in triplicate) and it was eventually explained that I had inadvertently used the form for 'Belarus' citizens and not the 'foreigners' form. Let me be clear that nowhere on the form did it mention any distinction between foreigners and Belarus 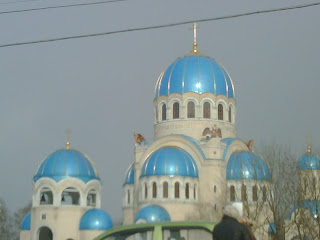 residents.After navigating the murky corridors of taxi diplomacy, I seemed to be making progress. Stepping out of the airport into the crisp cold afternoon air was like getting slapped in the face with a bag of ice. Cold was the word of the day and boy was that word an over-traded commodity. After an hour of driving through a crazy snow-storm, I arrived at the Danilovskaya Hotel which was something out of a 1970's James Bond movie. Built to withstand a nuclear blast with windows designed to keep radiation out, this was a budget hotel in name only and without any service at all. Even asking the concierge (who didn't really speak English) to book me a taxi was met with an unapologetic scrap of paper with a phone number on it and a few other words in cyrrilic script. Communication in the Russian federation is challenging and I was quite surprised by my inability to decipher even a single Russian letter on signage or understand a single word of the local lingo. I downloaded a translation application on my phone and even this did not help as the pronunciations are challenging, even for a Stellenbosch educated Afrikaans speaking souty. I finally found that the only way to compare the words on the map with the words on the street signs was to compare the shapes of the letters.Now that I have set the cultural scene, let me explain that Moscow has never been accused of being a pretty destination. It does however have isolated examples of breath-taking architecture and somehow familiar examples of extraordinary (or grotesque depending on your angle) edifices that hark back to the days of the cold-war. I spent a late evening clearing my head wandering through Red Square in the driving snow and it certainly felt a little like a dream landscape, but the reality of mass unemployment and beggars on the street corner soon dispelled all hints of romanticism. I should also note that despite extensive investigation, there was absolutely no evidence of the iron curtain.Hot tip: There are easier places to sell wine, but the Russian market, even now, is flush with cash and if you can navigate the complicated entry procedures, South African wines are considered seriously good value and can, and do, make an impact. The Russian market is also untainted by any kind of historical (read early nineties) baggage that over-zealous wine marketers might have foisted on the British. Wines from South Africa seem to be considered cool and in the many high-end wine retailers that I visited were often positioned in the pride of place and amongst the best wines of the world. I also visited a couple of every-day supermarkets and was happy to see wines from South Africa being displayed prominently, and at price-points that seemed to indicate a relative value against our antipodeans and South American compatriots. Yes - the 'V-word' translates globally and it is just as valid here in Moscow. As an aside, have we considered how many people around the world that are trading down in price point, are currently trading down to the South African price-point. A wise man once said that there is nothing quite like a recession to realign markets and bring supply and demand back to an equilibrium of common- 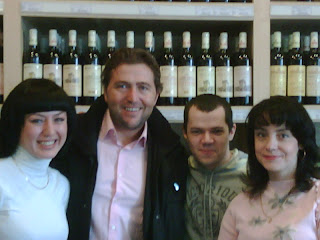 sense. Perhaps it was the same wise man that noted that some of the worlds biggest success stories were founded by opportunists and entrepreneurs during a recession. The South African value proposition is going to hold us in good stead over the ensuing months as the world shakes it's excesses out of the system.Back to Russia; the wine culture does not scream at you and to truly uncover the potential of this market you really have to scratch around a little. I did. I discovered wine, vodka and cigar bars hidden below ground behind unmarked doors. I found wineshops that were so eager to learn that they were prepared to shut down the store for an hour long presentation. I met serious sommeliers that actually listened to what a winery owner from South Africa had to say - and took notes. It is a far cry from some of the more established blasé markets that have been overrun by winemakers on their annual overseas holiday (read: wine marketing trip/employment perk) who are judged on their ability to limit their expense account rather than on tangible results.Some (secret agents and wine marketers) would suggest that departing Moscow brings a certain bitter-sweet level of relief and an inner calm - I would not disagree with this completely. Despite all of the mixed opinion above, Moscow has not scared me off - the market is exciting, edgy and pulsating with potential. A little adrenaline never failed to galvanise my resolve and I will be back.
Posted by Unknown at 8:23 PM